The Future Factory is a Non-Profit organisation that was founded by Anne Siroky in February 2001. After retiring from volleyball and realising that few schools had a sports programme, she decided to start The Future Factory. As sport played an integral part in her life she decided to embark on bringing school sport to the schools through Olympic sport codes and sports development. She enjoyed sports and was always striving for all children to be afforded the opportunity of  a chance to just play and have fun.

Anne Siroky is a great humanitarian and is a living legacy through her sports coaching, playing and all her work while making, moulding and shaping athletes to reach their full potential. She is a remarkable person that has Proudly South African imprinted in all her work and a great role model for all to emulate. Her persona and mannerism is about making people feel worthy and she daily encourages that to all, no matter what the person does each person should be treated equally and with respect. She encourages positivity in all she does and with those she works with, and negates negativity. Diagnosed with cancer and many setbacks through operations and accidents, she has fought to overcome her adversities to live and continues to do great work, ensuring that communities benefit with all the interventions that The Future Factory has to offer.

Who Is The Future Factory?

To afford the community irrespective of their situation the opportunity to engage in sport, recreation and other activities that will develop them into the ultimate holistic person through healthier living, education and through the marks of excellence.

To continue to shape individuals to become the best they can be and create an environment that does not discriminate against anyone regardless of their situation to participate in our activities.
To ensure that education is the number one goal and that the wellbeing of people comes first.

The Future Factory began facilitating the Western Cape Department of Social Development’s Ke Moja project in 2007. Ke Moja, meaning “No thank you, I’m fine without drugs” is a programme that was designed to educate learners about the dangers of drugs, while providing physical activities to show them that there are better options than taking drugs. The learners worked with a trained Ke Moja facilitator placed in their school, and develop their fitness levels. Various tasks were tracked throughout the programme so the learners could see their improvement. The pilot Ke Moja programme started in four schools and two maximum facilities, but had grown into many more areas and schools in the Western Cape. Ke Moja Phase 2 was rolled out, providing even more job opportunities and involving more children. Unfortunately the programme is no longer being implemented by The Department of Social Development. 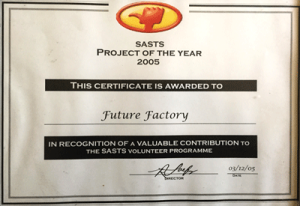 Our Skills are not limited to 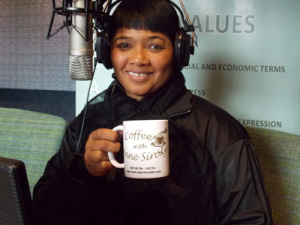 Over the years this dynamic woman has achieved many accolades and awards that include: The South African Student Travel Services Project of the Year Award in 2005, named as the Shoprite Checkers SABC2 Woman of the Year for Sport in 2007, Western Cape State Winner for Old Mutual in 2007, Sowetan SABC Community Builder of the Year in 2007, and recipient of the Peoples Post Imvusa Foundation’s Community Spirit Award in 2007. Her sporting achievements are so long that there would not be sufficient place to mention them all here, but of note being South Africa’s former number 1 beach volleyball player in 1997, and National Indoor Ladies Team Player/Captain, a 20-year long service award for volleyball was bestowed to Anne in 2012. Also in 2012 she was involved in College Netball and sports and in particular coach of the College Provincial Netball team that won the Gold medal at the Inter College Championship. In 2015 she toured the Western Cape as Motivational Speaker for Woman’s Month for the Department of Community Safety with the MEC, Dan Plato. The Sactwu Spring Queen competition in 2015 was a huge success as she collaborated with Kim Cloete as MC for the event. Currently the Physical Education Coach at Rosmead Central Primary School and extra mural coach at Groote Schuur High School. Since 2004 until most recently, she has volunteered as MC for Cansa Shavathons and Relay for Life at various venues. Daily we receive acknowledgements for her outstanding work. 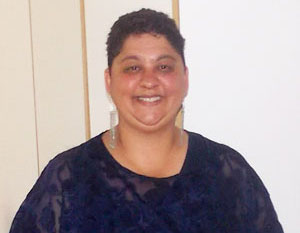 Jillian is truly an inspiration in her field of expertise, she has been a sportsperson of stature and has numerous achievements to her name. Her recent accolade of Sportsperson with a disability in the Western Cape for her District, and Runner up for the Western Cape has been one of her greatest moments and has been an inspiration to her and allowed her to grow to newer and greater heights. As a former Softball and Hockey player representing her Province and just missing the mark in the new South Africa of representing her country has in no way deterred her from sharing her skills with the underprivileged and building a better and brighter future for all children and people in her country. Her coaching stint started at school level through to club level and was chosen as the Assistant South African under 19 ladies softball coach that participated in the World Series in 2007. Jillian joined The Future Factory an NPO about 5 Years ago and has been instrumental in the growth the organisation has experienced over the last few years. She has such a belief in the vision, aim and objectives that the Non Profit promotes that she decided to vacate her Job with The Department of Community Safety to pursue her Dream of upliftment in the NPO Sector. Whilst at the Department of Community Safety where she was Acting Assistant Director of the Victim Support Programme of which it was awarded the Premiers Excellence Award in 2008 has enhanced her project management skills .Her Challenge amongst other things are that even though she has a hearing impediment, and it has been a struggle for her as she was not born deaf but became deaf about 10 years ago, and although we have chartered great avenues to correct this it has not yielded any joy as her physician and all the test has shown that she is better off in her current state working with her 80 percent hearing disability. Her biggest strength is that She Never Gives In, Never Gives Up and She Never loses Faith in what she believes in. Jillian has a big Dream, but an even bigger heart, and with this Amazing Spirit of Ubuntu nothing will stop her from taking her dreams to levels where nothing is impossible as she is also a God fearing Woman and the ultimate perfectionist. I love the fact that she instils so much joy in the children that she coaches and I can only see her territory growing as she continues to plant her seeds of positivity wherever she goes.

Clash of Clans APK for Android